There are many misused words in health care; aside from the definition of wellness.  Let’s compare and contrast a few terms that too often are incorrectly used interchangeably:

Prevention vs. Maintenance vs. Promotion

In our current health care system, most of what is referred to as prevention is really early detection.  Certain tests are important to have done routinely to catch dis-ease processes before they get out of control, but once something is found, it is already a problem.  Early detection is a very important aspect of caring for an individual, but if there is already a problem, is it really prevention (aside from preventing it from getting worse)?  Another way health care providers use prevention is by immunizing a population from the potential of contracting certain disease processes (ie: childhood vaccinations, flu shots, etc…).  In a way that could be considered prevention, but it is artificial and is not without risk.

Then there is maintenance.  Desiring maintenance is being satisfied without any symptoms or known dis-eases in the body.  Maintenance is the goal of true prevention.

The new term on the block is promotion.  Promotion is taking purposeful steps to ensure an optimal wellness lifestyle; which entails conscious choices and actions throughout the lifetime to not only avoid bad things from happening, but by making your body as strong and fit as possible to make it likely for great things to happen!

Here is an analogy I like to use.  Joe is planning to run a marathon.  Joe only read a couple of books how to train for this marathon and didn’t prepare his body for the punishment he would endure.  A couple of weeks before the race, he noticed a dull ache at the bottom of his foot.  Just to make sure he is ok, he went to the doctor to get it checked out.  Turns out, Joe had a stress fracture on his foot!  By Joe getting his foot checked out early, he prevented further damage by treating it appropriately and not running the race.

Joe’s brother John was a little smarter than Joe.  John started training months before Joe; he stretched and he did other exercises to strengthen his body.  By maintaining his body the way he did, he ensured himself an opportunity to not only compete, but possibly even finish the race without injury.

Now there’s Jane, Joe and John’s sister.  Jane decided to not only stretch properly and exercise, but she also made sure that she 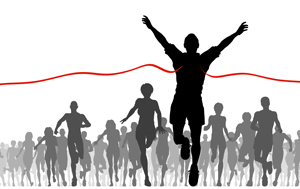 fueled her body efficiently, ensured optimal nerve flow to all of her body parts and made sure all of her muscles, organs and glands were functioning optimally before the race.  By Jane doing what she did to prepare, not only did she give herself to best chance to finish the race without injury, but she also gave herself the best chance to WIN THE RACE!!!

A wellness lifestyle is for the people who want to win the race of life!